iPhone is a device that makes life easy for you in many ways. It is also a device which makes life entertaining. With the sheer number of apps available on the iPhone, it isn’t too difficult to pass time. One of the best things that you can do on an iPhone is to create memes. Here are 5 Best Recommended Meme Apps for iPhone Users – 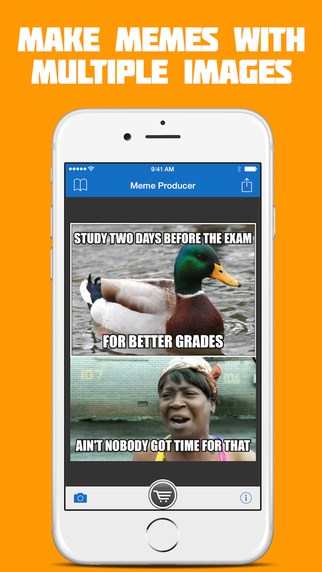 This is available free of cost. It generates memes on its own. It has been launched by halfmagnet. Halfmagnet has made a bunch of popular apps that are popular with the iPhone users. It can easily be downloaded from the iTunes store. If you want to fit a difficult situation into a small meme, then this app is for you. So, go download the meme producer from the iTunes store and start making memes left, right and center. One of the best features of this meme app is that you can use more than one image while creating a meme.

It is definitely one of the best apps in the market and a well rated one too. It has many more features apart from the fact that you can add multiple images to a single meme.

Also, it is very easy to add captions to a meme. Moreover, there is a huge collection of meme templates in the library if you can’t find any of your own pictures to be suitable. If you need to add a larger caption, there is enough space.

The very purpose of making a meme is sharing it and meme maker lets you share memes to social media very easily. Not only that, if your meme has been made for private purposes, you can send it to your friends. Though, one of the main reasons that this is the most popular free app is that it comes with no ads and no watermarks.

No wonder, it is often found to be amongst the top 5 apps across the world.

Picmeme is the second most popular meme app on the iPhone. However, it is a far more toned down version of the meme maker. To begin with, it doesn’t have a large number of templates. However, whatever templates are available have been neatly categorized for ease of access. You can also utilize a picture of your own if you like. The aim at the end of the day is to create a beautiful meme.

While this is a great app, you have to sign up to its social network in order to create a meme. One can easily add captions to the huge collection of templates or one can use their own images and add a caption to it.

This is also an extremely popular app and one of the best things about this one is that it has more than 260 templates to offer.

You can easily generate a meme using Mematic and that too in no time. However, the procedure is a bit more complicated than others. However, this app gives you the option of choosing from your own library or from popular templates just like every other meme creating apps. It has the bonus of the fact that it advises/guides you to create memes in meme style!

Alok Rana founder of LoudTechie. Like to share his blogging experience and resources with readers. Offering best money making blogging opportunities to new bloggers. He loves to talk about how to blog, SEO, Traffic Strategies and Marketing.

Please log in again. The login page will open in a new tab. After logging in you can close it and return to this page.